Have A Little Faith in We

The Story of Us 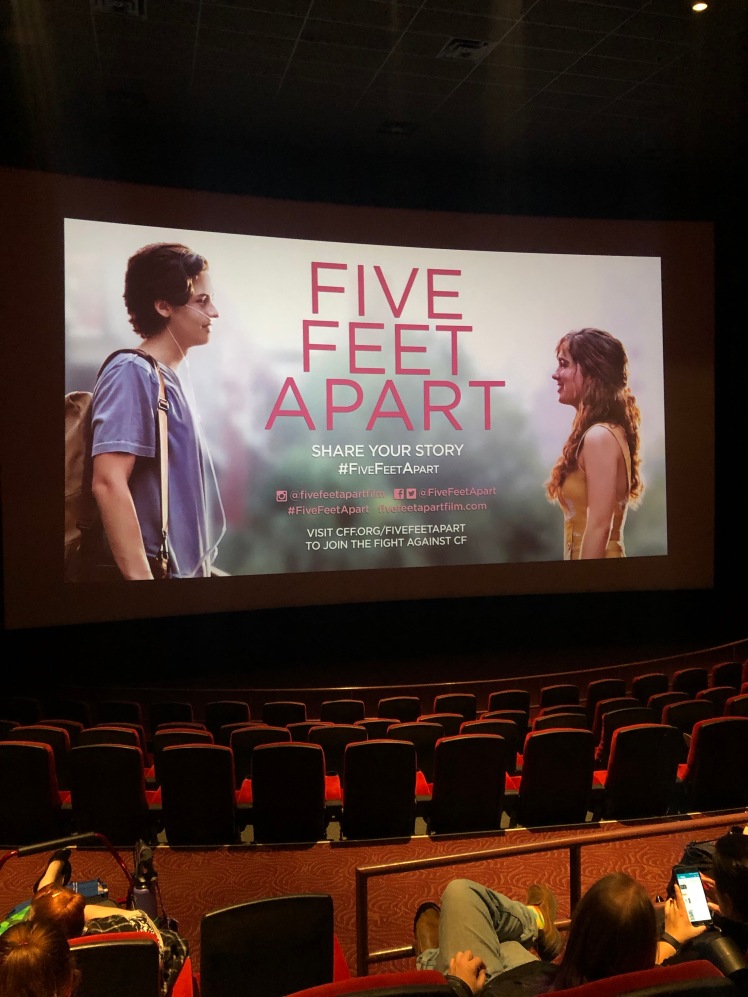 The biggest worry I have heard from the Cystic Fibrosis Community around the movie Five Fee Apart is a misrepresentation of CF life. If we are all being honest, there is no way one movie can portray all the different versions or complexities of this serious illness. That was always Danny and I’s perspective: just gotta take the movie for what it is. But while reading the book in December, I was blown away by the things I realized about CF life. This made seeing the movie very exciting and it did not disappoint. I was overwhelmed by the ways it described this life and how various details spoke to a lot of the realities of this world. So in honor of the movie’s public release last week, I am sharing five truths this movie shared about CF life- from the perspective of a CF wife.  There are no spoilers, but this post may make you more aware of certain aspects of the film.

There a few specific details in the movie that stand as visual reminders of the characters having CF. The obvious one is the nasal cannula.  Although not every CF patient has to wear one, it speaks to the struggle to breath. Danny and I talked about how he felt this was being used to portray CF. His answer: just grateful he never had to use one and how awful he feels for those who have to worry about oxygen. All in all I was prepared that we wouldn’t feel a connection to the appearance of the CFers…. but there is a moment where you will see the characters full body scars and I was blown away: each patients’ scars were the same and they were all the same as Danny’s. It was powerful – maybe CF patients aren’t that different after all.

In this movie each of the characters have a way of making the hospital room their own. If you know Claire Wineland then you will know exactly where that came from. And some CFers have felt like this can be a confusing message: hospital rooms aren’t dorm rooms. BUT it struck me sorta different …. in fact sorta dead on. Danny does not decorate his rooms but EVERY LITTLE THING has a place and he doesn’t allow one extra piece of anything around: no flowers or get well balloons and no socks… we have to take his  laundry home the moment it’s dirty. Now he is patient, especially since Hopkins is further away than his previous hospital…. but the point is Dan’s way of owning his room is no clutter and every breathing treatment piece of machinery or pill bottle has a place. The hospital room is clearly his domain  and we all have learned to accept this as his way of doing hospital life.

Throughout the movie each patient goes through different periods of having to accept or adjust or just plain deal with the disease. And each in their own way have to shut down and go into themselves during those moments. Now this could be a personality thing… but I will tell you it’s something I hear and experience a lot in the CF Community. These people have been living their whole lives being sick and having to adjust… accept…. and make different work – they become experts at it. To be able to do this life – they need the time and space to work through it. So often they feel a responsibility to help their loved ones deal…. which means more time and space to develop the ways to introduce the update to the their family or explain it to their friends. From where I sit, there aren’t necessarily dramatic cinematic pauses in real life, but they are in CF life. Believe me I know as a CF wife who has sat on the other side of the door, just waiting for him to ready – broken I can’t help him through the process – but knowing sometimes its just learning to accept the wait and be patient.

What doctors mean to CF families

I do agree that in the movie it seems like the same doctors and nurses and hospital staff are on 24-7.  This isn’t the case in real life… but the point of this aspect of the movie is to show how close we become to those in our medical world. Certain doctors, nurses and CF team members have become some of the most important people in our life. When Danny was having a moment of wondering if he should decline the lungs, it took the voice of our Doctor telling him “these are good lungs” for us to proceed. Dan’s ICU nurse post transplant we believe was an angel sent directly to us. When I was wondering if Dan would recover…. if our marriage would survive transplant… it was the docs and CF team who said the perfect words of comfort and courage. These people have seen us at our best and worst and we love them dearly.

Living Life in the Hospital

Finally there have been some frustrations that hospital life looks like summer camp. And while I have never had a romantic candle lit date there…. I will tell you we have done birthdays, vacations, holidays (just I have hit all holidays with the exception of Christmas Day and 4th of July… and I think Dan has) all in the walls of the hospital. We have learned to make movie and take out dates work, we have wedding planned and job interviewed, and conducted financial planning in the hospital. We have completed adoption forms, held religious services, and closed the door on unhealthy relationships in those walls. We have had romantic moments, horrific fights and cried our eyes out…. and we have opened our lives up to the world about our happenings and also opted to tell no one. You get it right? We know how to live out our existence in the hospital- Danny knowing this life forever and then having to teach me so we could share a life. Maybe it is not part of a movie screenplay,  but we most certainly have written the chapters of our life from the hospital.

For me the book and movie were very different. I learned different things about the story and felt other emotions about our world as a result of each one. I would encourage enjoying both and for extra credit I would also recommend checking out Claire Wineland as her influence is strong in this film, just like the strong force she was.  My hope for this movie is it brings awareness to a disease that could use continued support until we have a cure…. and the extra lessons are most certainly a great addition. Enjoy Five Feet Apart!

Thank you so much for reading and remember to make it a great day!

Welcome to Have A Little Faith In We! My name is Jackie Bessette and I am a Catholic, a mom, a daughter, a sister, a friend, an association professional and this is my blog.