Have A Little Faith in We

The Story of Us

Hello friends!! Happy Monday! Well birthday week become really full with a lot of fun….. so sorry for the radio silence, we were out enjoying life!! Which means we have a 2 weekend wrap ups to complete and LOTS of pictures…. so get ready….away we go!
Last weekend we had a completely unexpected surprise – we were home! Tuesday March 2 Danny  checked into Hopkins hospital for a tune-up. We were prepared for this little trip to take all sorts of twists and turns on the path of health, but we were determined to stay positive and flexible. And for three days we did awesome…..which paid off HUGE since Danny was approved for IVs at home and back before we knew it! We were all very excited!!
Friday was a long day for me. After a week of getting up extra early to take care of pup, and trying to make the most of the work day since I had a hard stop to get home and walk the dog – the week was a long one. But the it washed away pretty quick when I pulled up and saw Dan’s car parked right outside our house! Both Quinlan and I were happy as little clams…. no hospital slumber party for us we were home! And the perfect way to welcome Danny home – pizza and movies. We all showed up, threw on our PJs and cuddled up on the couch. Welcome home Danny!!
That Saturday was SUPERDANCE! Originally I planned to meet my high school partner in crime at the dance for a visit and then lunch at an old stomping ground. This was all canceled when the hospital stay hit…. and just like that it was back on the books when Danny was home. He planned to spend the weekend at home resting. The hospital can actually be a really hard place to recover – not sleeping in your own bed, docs and nurses coming and going – you come home exhausted. And between that and a few IV complications – Danny was beat. So I was able to head out guilt free for the day and let him rest.
Libby and I were on the SCA Executive Board our senior year of high school making the SUPERDANCE our big event. It was one of the most incredible experiences – and we LOVE to relive it. As you all know, I am very blessed with a lot of special friends form high school, but Miss Libby truly is my partner in crime – since she is always ready and willing to relive it with me (over and over again). So 13 years later and we were back in the thick of the fun!
This year was extra special with my sister Bridget being so involved – so we had a VIP to help show us around!
The students raised over $105,000, with 100% student body registration – a first in the history of this dance! Congratulations everyone and thank you so much for all the hard work and support for CF! Here is a video from that night, put together by a student – if you want to know what it feels like to really be  part of the SUPERDANCE.
This SUPERDANCE will be the last that has a Heppes kid dancing as a student…. and at the same time the first dance Ganmommy ever visited. It warms my heart that she is able to see all the little events that tell our life story. Not everyone is that lucky with their grandparents. We are all very grateful.
Following a check-in at the center of the action, Mom, Libby, Ganmommy and I all headed to Joe’s Pizza and Pasta – a DJO favorite – for lunch and to visit. It was a great afternoon and I am so lucky to have all these ladies in my life!
On my way home I did a quick stop at my in-laws. It is Pat’s birthday in March too and we had a big dinner planned. But with Danny still in recovery mode we opted to sit this one out. At least I was able to drop off some flowers and wish my fellow Pices a happy day!!
That evening Danny and I spent quietly at home followed by a Sunday of the same. We got a few things done around the house and were able to prepare for a good week all under the same roof. Throughout the weekend we would both stop and say how awesome it was to just be home…. we are lucky for the advancements in the CF treatments that allow for life to continue along somewhat normal….so thank you DJO for dancing and raising those funds for research!
This past weekend was BIRTHDAY weekend! Kicking it off with a day out of the office! At our company we are given the gift of an extra vacation day for our birthday and so I selected this past Friday. We had planned a little winery get together for Saturday and I figured a day off before would give me a chance to get ready – and it happens to also be Quinlan’s birthday!! We adopted him from a rescue group -so they are not 100% sure what his true age or birthday really is – but he was estimated to be about 4. So we celebrate his birthday and “gotcha day” (the day we adopted him) on the first day he became a Bessette – March 11.
We believe this year he turned 7 and we celebrated the 3 year of his being all ours! To commemorate the day of course Quinlan got to have his favorite treat – a Starbucks croissant (I wonder where he got that idea from 😃 ) and then a BIG birthday toy – a Shark! 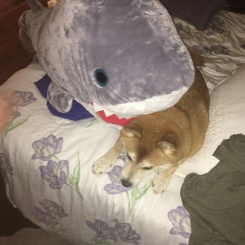 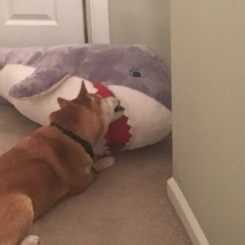 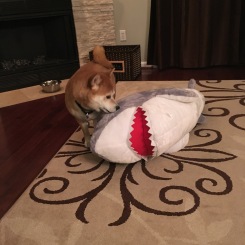 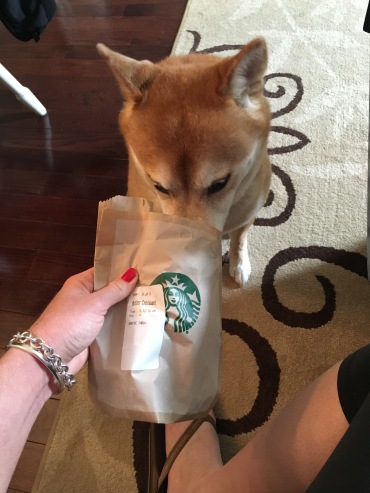 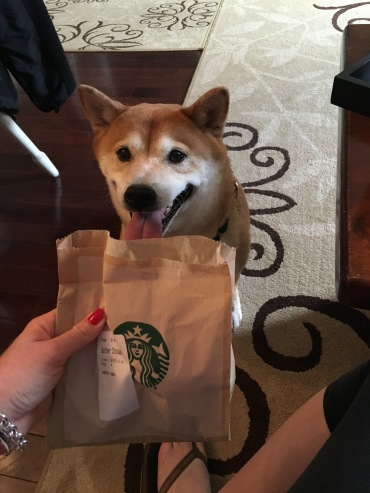 Happy Birthday Quinlan! March 2016
My way of celebrating this day was to get my nails done with my mom and Ganmommy. After that we did some party planning – my mom was the star of the winery show with decor and a spread of cheeses to die for – and so we spent Friday plotting and planning. A day that involves nails, Starbucks, an arts and crafts store and Homegoods – is a GREAT day! Combine that with this being a normal work day and it was awesome! There is some thing so fun about being out doing your own thing while its a normal work day. You can’t shake that high school feeling like you are skipping class….. and today I made the most of it!
That evening Danny and I went out for my birthday dinner at our favorite, Ford’s Fish Shack (happens to also be a perfect Lenten Friday spot). We had planned to go on my actual birthday, but Danny was having a little bit of a tough day, so we held off until Friday.  Dinner was delicious, but it was the after dinner entertainment that was the most fun. Quin’s shark was hanging out in my car until he would get it that night. So after dinner on our way home Danny decided to have the shark hang out our back window and blare the theme song from Jaws. I was laughing pretty uncontrollably, until we pulled up to a car of teenagers who liked the shark, but did not get the music. Are we that old?
Either way it entertained us and I feel like even if Quinlan is still trying to decided if he likes the shark – it has already been worth it for the fun it has brought to Danny.
Saturday morning I was up bright and early to collect the final birthday party supplies and wrap up some last minute contract work. Although it was early and no one likes the feeling of a looming deadline – it was AWESOME to finish a big project before heading off to have a fun day. It felt like an every bigger accomplishment to be DONE not just for the weekend but on a large goal …. making celebrating EXTRA SWEET!!
Our Evite to family and friends was to pack their own picnic baskets and head to Paradise Springs Winery for an afternoon of food, fun and toasting to my 31st. So I planned to have a few snacks and decor spreads – but had intended to keep it simple. Well one thing led to another and simple was completely overrun with festive and fun! And my mom and I had BAGS of stuff. Originally I had hoped to be in the winery tasting room or on the balcony, but even though we were there close to the winery opening it was already packed!! An early spring day in the rollings hills of VA? Yup – everyone has wine tasting on the agenda! So we opted for the picnic tables in the park area. I was not as thrilled, and even less excited to find tables that had been exposed to a lot of the elements… and birds. But leave it to my mom to know how to spruce up a space in no time!
After her handy work it was just add wine and a people and we were all set! It was a perfect afternoon. Friends came and went as schedules allowed. We all dined and toasted and chatted! My heart was just bursting with the love for all these different people who have played various roles in my life. It was a great day and I had a blast!
That night I was pretty darn exhausted since we had been at the winery since noonish and did not leave until almost 7! Yup – we came, we saw, we conquered…. and then we all slept!!
Sunday morning was a quick start too and Danny and I were up and out the door to our friends’ Ryan and Megan’s couple wedding shower. They are getting married this May in Charlottesville, VA. It will actually be a little weekend away for us ….. we can’t wait! Ryan has been a friend to both Danny and I since high school (even before we were dating) and it is an honor to be able to be a witness to this next chapter in his life. Hope they are ready for our wedding dance floor skills…….
And then birthday weekend came to an end in the most perfect way – my sister Bridget and I had dinner just the two of us, followed by a taste testing of Georgetown Cupcakes! In our big family it can be really heard to have one on one time, and it meant a lot to me that Bridget wanted some time just the two of us to celebrate. A chance to catch up on all her plans and hopes for college was a blessing. I have no idea where the time went……but I am so glad I have been able to be a part of all her many milestones. She is an incredibly special person….. and I am honored to call her my sister.
And the cupcakes….well they were from my sweet friend Amanda and her boys! We went to grade school together and although they live in Pittsburg now, her parents are still in my neighborhood – so I get to see her a few times a year. She was so sorry to miss the winery fun – she sent the cupcakes! We certainly missed them – but these pretty AWESOME cupcakes helped ease the pain.
So there we have it – some pretty fantastic weekends in the books! 31 sometimes seems incorrect…. but if this is the kick off? Well – I am ready!! Cheers to 31 years!
Have a great week everyone!!
Thank you for reading and remember to make it a great day!
Jackie

Welcome to Have A Little Faith In We! We are the Bessette family- Danny, Jackie and Quinlan! An extraordinary life is created from all of the ordinary moments....and here in our little corner of the internet you can follow along as we celebrate the extraordinarily ordinary!